B – Bravery when facing trauma 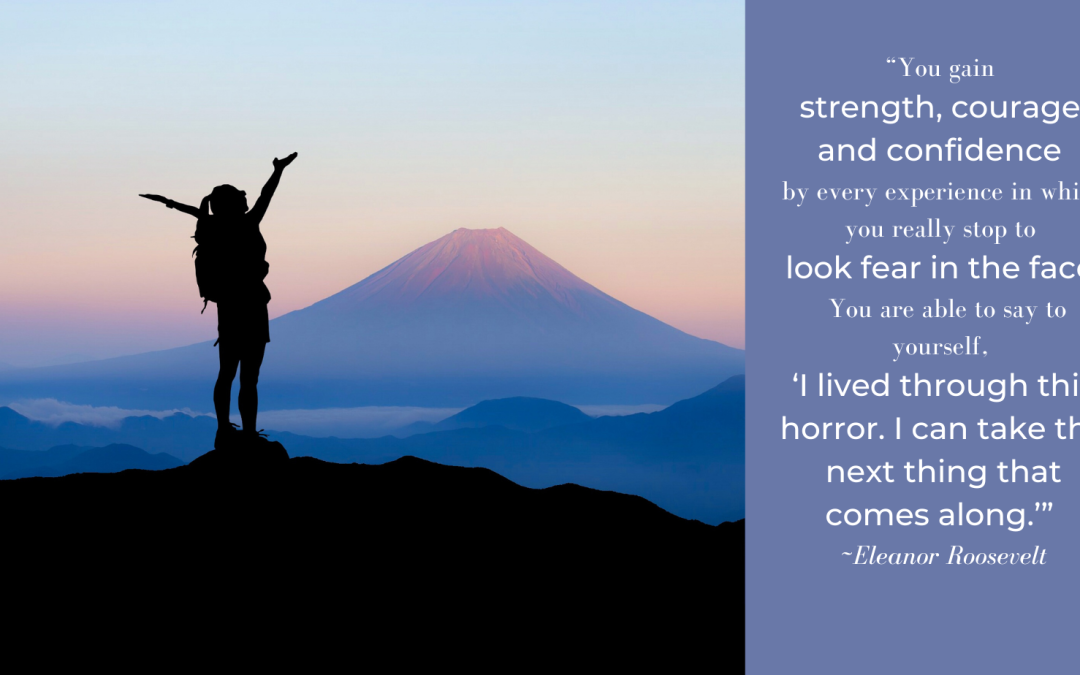 “You gain strength, courage, and confidence by every experience in which you really stop to look fear in the face. You are able to say to yourself, ‘I lived through this horror. I can take the next thing that comes along.’” ~Eleanor Roosevelt

I have always been the person who would dive into the swimming pool without putting my toes in first. I did it once when my friends and I snuck into a pool that had just been filled for the season and learned what 52 degree water feels like when you dive in. The surface of the water smacks you like a brick wall, sucks all of the air from your lungs, and your extremities turn blue before you can surface seconds later. Do not be concerned: the hysterical laughter of my friends warmed me right up.

I don’t like testing the water because when I do, I psyche myself out. Water that might be a bit cool but suitable for a hot summer day, suddenly seems daunting when your warm feet are startled by the temperature. Wading in slowly is just a torturous exercise of waves of cold shock. I prefer the full body dive and getting it over with.

I’m like this with many things in life that are scary. You can count on me to dive in head first just so I don’t have to let my anxiety about the fear build. The sooner it’s over, the better.

This fearlessness, though, has faded for me in times when I’m facing a fear that was born of real trauma. Whether it was lost love, my child’s health, my own health, even a railroad crossing. my resolve to dive in can be hampered or totally squashed.

Over time, I’ve learned to be brave in facing these demons, but I can’t say my bravery yet matches my courage in the face of more ordinary fears. I have learned to take time to assess the situation, consider the true parts of the demons, and move forward with intention.

My health is the perfect example. When I was diagnosed with cancer in 2006, I really fell apart in so many ways and became dependent on others to keep me going. There is nothing wrong with that – not at all. We should all be so lucky to have people to prop us up in times of need. But as time went on and I kept dealing with one health concern or cancer scare after another, it became evident I needed to be more self-sufficient in my dealings with these problems.

In 2011, I was diagnosed a second time and this round was very different for me mentally. I knew six months before I was diagnosed that it was coming, having found a lump that I showed my doctor. Even with scans, they decided to take a “wait and see” approach with follow up scans every three months. By the second round of scans, slight growth was measured, so they took a biopsy and secured the diagnosis I already knew.

2006 me never would have waited. 2006 me wanted this nastiness out as quickly as possible and to try to get my life back to normal. 2006 me would have thought I was dying tomorrow if something didn’t change NOW. 2011 me knew my life was already not normal and wasn’t going to be again. 2011 me wasn’t afraid of this slow-growing bastard, especially if the doc wasn’t too fussed. 2011 me said “fuck it” and kept on living, knowing the scans would ultimately tell the truth.

I know to face my fears around doctors and cancer appointments with my arsenal of coping skills – to bring a friend or have one on standby on text, so I can chatter away during a bout of white coat anxiety; to breathe deeply and be in the present, considering the future outcomes of the most recent scare is only a waste of time; and to keep living while I wait for appointments, tests, or results.

I have applied these bravery skills to other areas of my life with some success. Something ugly at work rears its head? Bring in helpers, stay in the moment, keep moving forward. A relationship has turned into a stressful struggle? Call a friend, focus on the present, take the next step.

It may not be diving into an icy pool head first without testing the waters, but it’s bravery, just with a more mature spin.