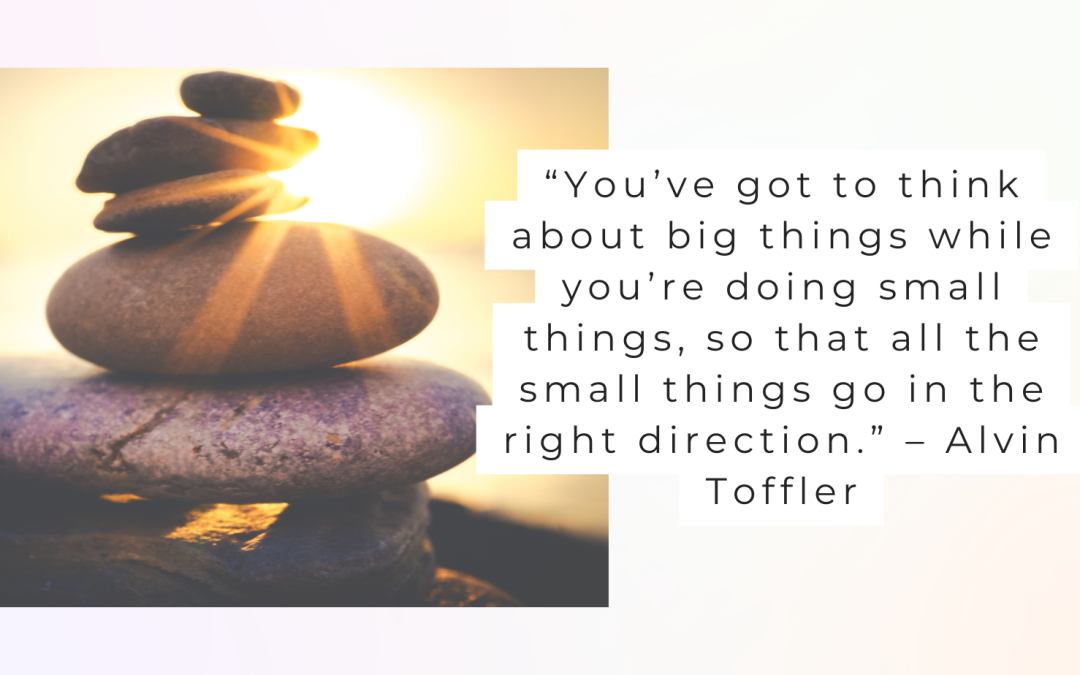 “You’ve got to think about big things while you’re doing small things, so that all the small things go in the right direction.”  – Alvin Toffler

Once upon a time in my life, amidst the devastation of betrayal, I looked at the person who had just become my ex and emotionally, tearfully, bitterly cried that I had nothing, while he had everything.

I was most fixated in that traumatic moment on the idea that he had love, primarily because he was leaving me to be with someone else. I was consumed with emotions, to be certain, so my blurred mind didn’t understand the scope of the disfunction in front of me. As many will tell you, the worst part of betrayal are the lies – a swirling storm of confusion that comes when you realize the person you trusted wasn’t the person you thought at all. And in this case, the lies weren’t only about the betrayal. The lies extended from before the started point of our relationship up until the last words we spoke to each other.

I spent the next two years trying to sort out the house of cards that collapsed around me when I discovered the affair. Though I never unraveled it all, I did learn enough to know that absolutely nothing I had known about this person in our five-year relationship was authentic. He was not employed to the level he claimed, nor educated. He wasn’t chasing the dreams he claimed were so important. He wasn’t as kind as he portrayed. He had a criminal record. He was in debt to his eyeballs.

I believe now that our relationship was just a fairytale of his making. He wanted a perfect family to live out his fantasy life, so he had created it with me. Well, tried to create it and when he failed at his self-defined role, sought out others to try again.

But in the moment when I wailed that he had everything, I didn’t know all of this. I could only see what I thought I was losing. I could only mourn for these losses. I was convinced I’d never have anything better.

I was at least wise enough to seek therapy immediately. Within days, I began regularly seeing a therapist who focused on recovery from cheating. It took months just to confront that my life had not been what I thought it was. And longer to feel confident in my abilities to move on alone.

Probably 18 months into therapy, she had me write a vision for my life. In this vision, I had to be very specific about where I would live, with whom, what I would be doing, what I would become. I had to write in present tense, as if I were already living this vision.

I spent hours on my first draft, only to have her say “this isn’t specific enough. It’s not big enough. Think about it more and about what you want.”

It was hard work, mainly because I didn’t believe this vision was possible. I didn’t want to think or dream too big because I wanted it to be an achievable goal. My therapist rejected the limits I placed on myself. She kept pushing me to dream and dream large.

I struggled because I interpreted “dreaming large” to mean big cars! boats! mansions! I am not that person and I do not want those things. What I finally realized was I needed to imagine my wants (which were buried deep), my needs, and my hopes, in the most unlimited dream imaginable.

My daughter taught me a concept recently called radical imagination. It’s a concept and a social movement that asks people to imagine the world not as it is, but as it might be. So, instead of thinking “let’s fix this broken institution,” completely reimagining what it could be. That’s the simple explanation. There are many books, blogs, and a podcast on the subject if you’d like to learn more.

That idea, though, is exactly what I was doing to my own life. Turning all of my preconceptions upside-down and starting from scratch. Starting not from where I was to build a dream, but reconstructing my entire life as if anything were possible.

It turns out, anything was possible. As part of the multi-week exercise, I also wrote who my future husband would be. I knew I wanted to experience a marriage that was everything I dreamed. And while I continued to work on myself, I would pursue a happily single life. But if I were dreaming big, I was going to dream up my perfect relationship.

Many years elapsed before I met the man who would become my husband. Not long before we were married, I rediscovered my “relationship vision.” It was so sweet to read and see how much of the relationship I had manifested. The parts that hadn’t come to pass actually were things I would have rewritten anyhow if I’d done an edit shortly before meeting him. Five years had passed between the time I wrote the vision and when we met – years where I had been learning, changing, and growing, so my dreams were changing, too

Since recognizing that my vision did come to pass, I’ve been thinking hard about my next set of dreams and trying to make them as big as I can imagine. I know now that I have the ability to make them happen, whether I consciously work toward them or not. The only way to start, though, is to dare to dream big in the first place.